Affectionally dubbed ‘the Tron’ by locals, Hamilton is a sprawling city nestled in the heart of the mighty Waikato region.

The city is linked by a network of bridges and walkways along the Waikato River. Together with the ever-popular Hamilton Gardens, it’s the perfect destination for keen walkers and cyclists.

Hamilton’s proximity to nearby towns like Cambridge, Raglan and Matamata makes it the ultimate base of operations to explore more of central North Island.

Plus, with plenty of scrumptious eateries and a bustling retail precinct, Hamilton has lots to offer visitors looking for a fun day out.

Find out all you need to know about what makes Hamilton so special in this guide… written by a Hamiltonian, no less.

An Overview of Hamilton

The History of Hamilton

Despite its calm streets now, Hamilton has a rather violent past.

Hailing from the Tainui waka (canoe), its earliest Maaori settlers gave it the name Kirikiriroa, meaning “long stretch of gravel”. They built many paa (settlements) and gardens along the Waikato River – some of which can still be found today.

Did you know? The use of double vowels instead of macrons follows the preference of Hamilton’s tangata whenua and the Waikato-Tainui iwi (tribe).

The early 1800s brought a growing population of European settlers. This was a relatively peaceful period of trade. However, it quickly soured after the New Zealand Settlement Act was introduced.

Sadly, this saw 1.2 million hectares of land confiscated from Maaori in the Waikato region alone. It led to the beginning of the anti-land-selling Maaori King movement (Kiingitanga). Eventually, war erupted in the 1860s.

The Waikato War continued for years, with the European army claiming victory. The first permanent European settlers arrived soon after, in 1864, and Hamilton slowly began to grow into the city we know today.

See if you can spot the many traces of its past, from Beale Cottage (one of Hamilton’s oldest surviving homes, in Hamilton East) to St. Peter’s Cathedral on the opposite side of the river.

Now the fourth largest city in New Zealand, Hamilton boasts a booming student population and is a leader in agriculture and farming.

It also hosts several hugely popular events that draw crowds from all over the country.

There’s also the incredibly unique Balloons Over Waikato. Visitors end the summer on a high with a spectacular show of hot air balloons lighting up the night sky to music and fireworks.

The Geography of Hamilton

A short two hours drive from Auckland and Tauranga, Hamilton is New Zealand’s largest inland city. Together with its low hills and flat plains, this tends to mean frosty, foggy mornings during winter and hot, dry days in summer.

Over the years, the altering course of the river has carried volcanic ash and debris from the Taupō eruption, shoring up the rich fertile soil that the region is known for.

If you’re driving through the Waikato, you might quickly notice what gives it the title of the dairy capital of New Zealand. Other than cows, common wildlife also includes sheep, horses, goats, ducks and the occasional alpaca.

Things to Do in Hamilton

Put on your walking shoes because there’s plenty to see and do around Hamilton!

Top activities and attractions include:

Hamilton Gardens is a must-visit destination with its inspiring and unique garden designs. There’s also the Waitakaruru Arboretum and Taitua Arboretum for something a little further afield.

A Range of Local Attractions

Visit the famous Zealong Tea Estate and have a taste of their indulgent high tea, snap some pictures at the Lavender Backyard Garden or take the kids to the Cornerstone Alpaca Stud.

For something a little more challenging, take on the Hakarimata Summit Track. There’s also the newly completed Te Awa Cyclepath from Cambridge to Hamilton (with bike rentals available).

Join the crowds at the annual Fieldays or Balloons over Waikato events.

Plus, there’s the regular Tamahere Country Market every month – find it close to the airport. 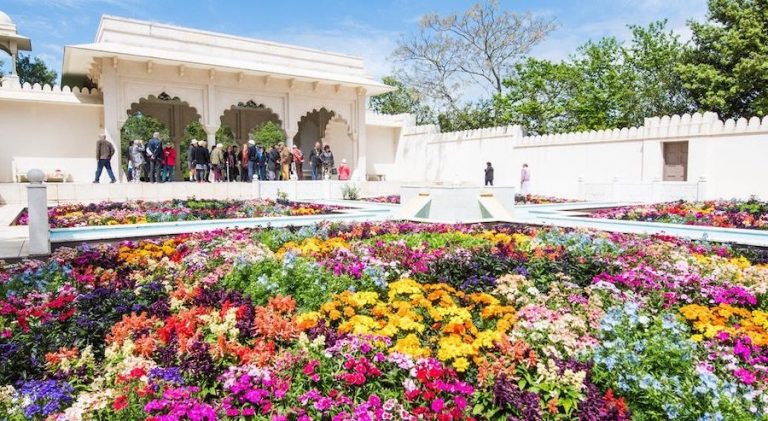 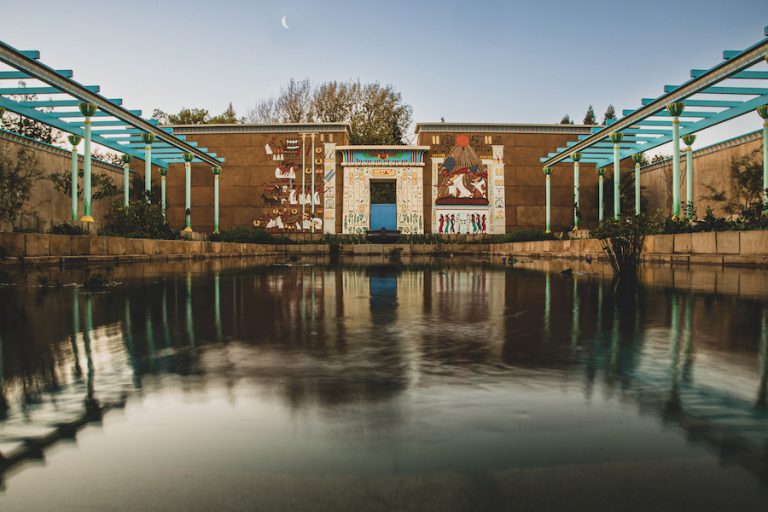 Save Money on Your Visit

As a reader of NZTT, you’re entitled to a range of discounts in the region.

Pick up a bargain through BookMe (no promo code required), or save 10% on anything sold through Klook using the following promo codes:

We’ve also arranged this special for you… 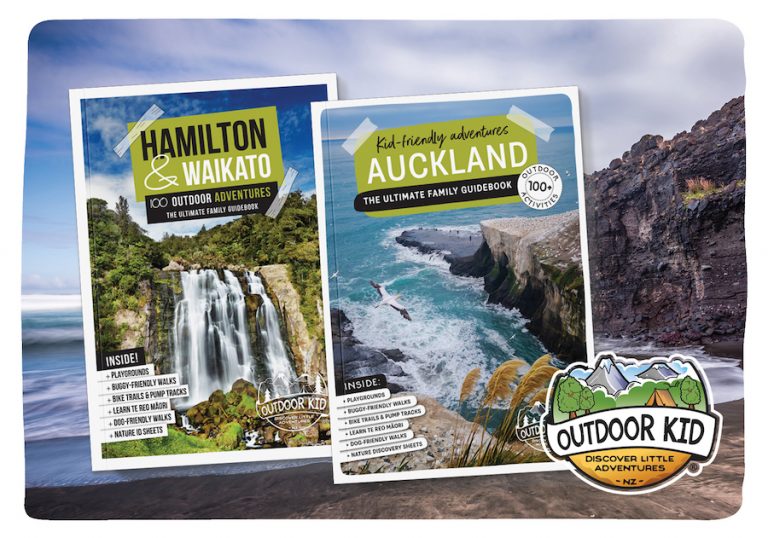 Places to Eat in Hamilton

While Hamilton features a vibrant café scene, there are some must-try hidden gems that you won’t find anywhere else.

These are some of the best places to eat in Hamilton:

Often described as the best thing to come out of Hamilton, Good George is known for their award-winning beers, ciders and spirits. Their taphouses across North Island also serve up generous, hearty meals to go with the ever-expanding list of craft beer and ciders.

If you like the heat, then Chilli House is your go-to destination. With platters of juicy, steaming dumplings and bowls of steaming Szechuan-style noodles, it’s the perfect pick-me-up on a cold wintery day.

It’s a ways away from town but Punnet Eatery is a rustic fine-dining establishment that is worth the trip. Make a day of it by swinging by the Strawberry Farm or paying a visit to the Country Providore, a specialty store for artisanal goods and chic homewares.

For a punch of sharp, zesty herbs and comforting family-style Vietnamese food, head to Bánh Mì Càphê at the heart of Hamilton city centre. It also has a fantastic range of vegan dishes on offer.

Located next to Ruakura Berry Farm, Camarosa is skilled at championing local produce with an elegant touch. If you go, make sure you try the real fruit ice creams next door!

Hayes Common is a neighbourhood eatery serving up big-city food. Just a stone’s throw away from the Waikato River, this establishment is known for its creative flair and hearty meals.

No list will be complete without mentioning Scotts Epicurean, an exquisite café with incredible seasonal menus and excellent coffee.

This award-winning café can be found right in the centre of the city by Garden Place. Cream Eatery‘s impressive cabinet offerings will leave you struggling to pick just one thing… so come hungry!

The Best Places to Stay in Hamilton

Hamilton is a great place to explore many of the central North Island’s top tourist attractions like the Waitomo Caves and Hobbiton.

If using it as a base, we recommend spending at least 2-3 nights to make the most of it!

There are plenty of motels and hotels in Hamilton to take your pick from but here are some of our favourites:

Pick from a range of studios or larger rooms, all in a handy location at the heart of Hamilton’s CBD. If you’re planning to attend a game at the Waikato Stadium, this comfy inn is the perfect spot for you.

With its on-site restaurant and close proximity to the city centre, this four-star hotel is popular whether you’re travelling for work or on holiday. It also includes unlimited free wi-fi and a gym for guests. 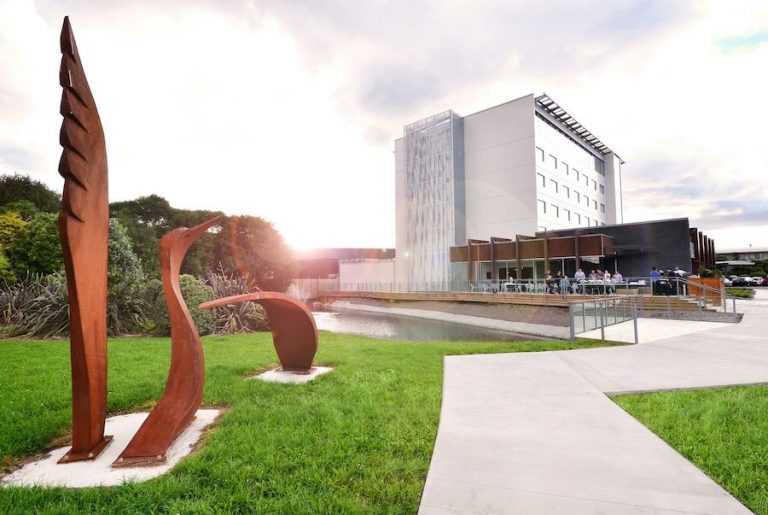 If you’re looking for somewhere to put up your feet and relax, this is the best spot in Hamilton. Located right in the city centre, this hotel features an award-winning restaurant and gym.

Self-contained accommodation: On the River

This excellent accommodation is in a prime location near Hamilton Airport and right on the river. With options to book the whole house which sleeps up to ten guests, it’s the perfect place for large groups.

Check availability: On The River.

If you’re planning to visit Hamilton for the day from Auckland, you can hop aboard Te Huia train.

InterCity buses also frequently pass through Hamilton while public buses service the wider city. If you have your bike with you, you’ll be able to ride much of the city too.

Of course, you’ll have much more flexibility visiting the following nearby locations if you have your own car or campervan.

Nearby Towns and Attractions

Hamilton has plenty on offer if you want to spend a day with family or friends.

However, if you’ve got itchy feet, there’s heaps to do beyond the city’s borders – and all within a few hours’ drive.

Stay local and explore more of Waikato or head a bit further to Rotorua, Taupō, Tauranga, Auckland or the Coromandel Peninsula.

This picture-perfect town has a quaint charm to it, with its leafy green streets and character buildings.

The main street is peppered with boutique shops and gourmet eateries, making it the perfect stop on your journey.

Just a short drive away is Lake Karapiro which is popular amongst paddleboarders and kayakers.

Cambridge is a 25-minute drive south of Hamilton.

Featuring the world-renowned Hobbiton village, you can wander around the famous movie set that was used in the Lord of the Rings and Hobbit films.

If you head east out of town, you’ll find the highest waterfall in the North Island – Wairere Falls. There’s a scenic walk that leads up to a lookout for you to enjoy the fantastic views across the valley.

Matamata is a 45-minute drive from Hamilton.

Raglan boasts a long coastline of black sand and dramatic waves chased by keen surfers. Here you’ll find fish and chips so fresh, they taste like the sea.

Tucked into the many nooks and crannies of the main street are plenty of delicious ice cream stores and an eclectic collection of shops to find the perfect unique gift or souvenir.

There’s also the picturesque Bridal Veil Falls nearby, which is just a short walk to the top, or the more challenging track up to Mount Karioi.

Raglan is a 45-minute drive west of Hamilton.

A network of caves and underground rivers is hidden under the rolling green hills of Waitomo.

Explore the caves on foot, via zipline, or float down on a rubber tube – the choice is yours! The Waitomo Caves are your best shot at viewing the breathtaking sight of thousands of tiny glow worms who call these caves home.

If you’re feeling adventurous give black water rafting a try – it’s our favourite way to see the caves.

Waitomo is a 1-hour drive from Hamilton.

With so many places to explore, make Hamilton the next stop on your road trip!